Traditional lion dance is synonymous with Chinese New Year, celebrations would not be complete without experiencing lion dance at least once. Widely practised across Southeast Asia, lion dance dates back to the Three Kingdoms Period (220-280 AD). Today, it continues to be a popular performance used for opening ceremonies, formal occasions, and primarily during Chinese New Year.

Symbolism of the lion dance:

You will see a monk-like character with an oversized headgear, or a Chinese doll with a fan. These characters are for comic relief and crowd control, but they actually act as a useful guide for the lions during tricky stunts.

The southern lion dance originated from Guangdong and is more commonly seen in southeast asia. The performance mimics the lion’s actions such as scratching, shaking of the body, or licking of paws.

Lion’s got the moves

Besides mimicking the lion’s moves, the performance typically reaches its peak with the lion stalking a head of lettuce, eating it and spitting it out at the audience. A “red packet” containing a token sum of money is attached to the lettuce, as a token of exchange for the blessing bestowed by the lion.

This action is also known as “plucking the greens” or “Cai Qing”, synonymous with “plucking the wealth and fortune”. So if the lion spits at you with the vegetables, smile and welcome your wealth with open arms. 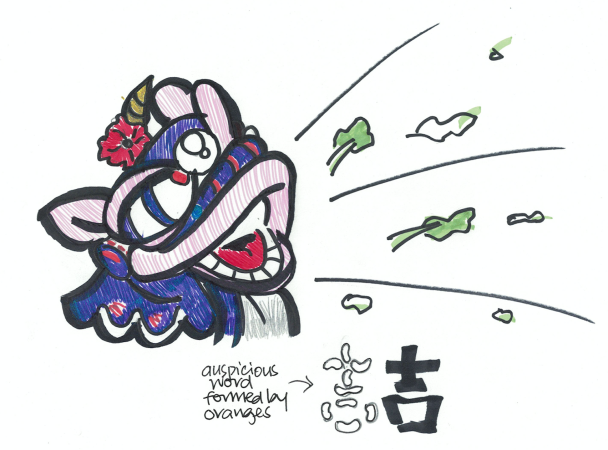 Other routines may include eating mandarin oranges, the lion performs a series of acrobatic stunts to reach for the oranges, “eats” them and unveils auspicious Chinese words formed by the peeled oranges. Skilled lion dance troupes could sometimes form Chinese well wishes in phrases! Who hires the lion dance

We hope this helps you appreciate the Chinese lion dance better and enjoy the festivities coming up! Leave us a note on Facebook if you’d like us to answer any queries about Chinese New Year activities or practices.

StraitsJourneys is a place for travelers to find and book deep travel experiences tailored to specific interests. The experiences are presented by carefully selected local experts. We expect to launch in days. In the meantime, register your interest in StraitsJourneys and be the first to receive our stories, updates and offers.

StraitsJourneys is a place for travelers to find and book deep travel experiences tailored to specific interests. The experiences are presented by carefully selected local experts. We expect to launch in early 2018. View all posts by StraitsJourneys